This is the website of the Auricular Style: Frames project 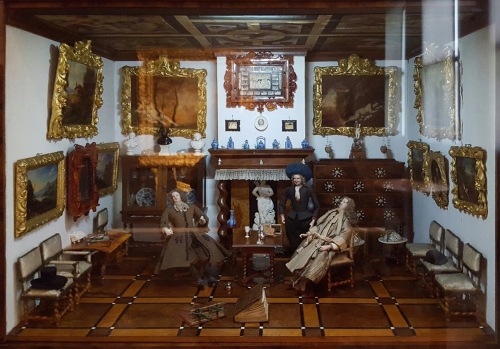 The exhibition on the Auricular style – Kwab: Dutch design in the age of Rembrandt – runs from 30 June – 16 September 2018 at the Rijksmuseum.

It has been reviewed for The Frame Blog by Maarten van ‘t Klooster, and the review is also included here, at Kwab: The Auricular in Amsterdam.

On 13th & 14th September the Rijksmuseum will organize an international, two-day symposium in connection with the exhibition KWAB: Dutch Design in the Age of Rembrandt, which is taking place at the Museum this summer. The exhibition will display some of the most important examples of objects decorated with kwab- or Auricular ornament, an important stylistic phenomenon in Dutch and European decorative arts of the 17th century.

The symposium will assemble some particularly renowned specialists in the field, including Tessa Murdoch (V&A), Matthew Winterbottom (Ashmolean Museum), Jet Pijzel-Dommisse (Gemeentemuseum Den Haag) and Johan ter Molen, who will share new insights into objects displayed in or connected to the exhibition, as well as related technical and art historical discoveries.

Participants in the symposium will have the opportunity to join a private view of the exhibition KWAB after opening hours on the evening of Friday 14th September.

We hope you too will be part of this exciting event, which will bring together those working on the decorative arts, 17th century painting and sculpture, the history of the Dutch Golden Age, and the history of design.

Registration details will appear on the Rijksmuseum website from April. Please see the symposium page for more information and a preliminary programme, or contact us by email.

‘…a silver ewer by Van Vianen will be offered in The Exceptional Sale  at Christie’s in New York. Chased in 1619 from a single sheet of high-grade silver, the ewer bears three roundels that recount the Roman myth of Marcus Curtius. As described in Livy’s History of Rome, the Roman soldier sought to to appease the gods and preserve the Roman Republic by throwing himself — horse, armour and all — into a fiery chasm which had opened up in the floor of the Roman Forum. Each of these scenes perfectly embodies the ideals of  “sacrifice, duty and honour”,’ according to Harry Williams-Bulkeley, Christie’s European Head of Silver. 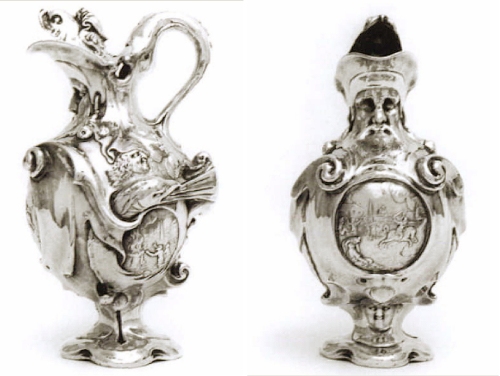 The Auricular Style: Frames conference, held at The Wallace Collection on 5th-6th October 2016, was extremely rewarding in its bringing together of different perspectives and transnational views of this amorphous and slippery subject.

The Dutch papers provided a broad and fascinating introduction, seeking to discover the roots, early expression and development of the Auricular in the Netherlands, and to establish it as a stylistic language in continuous use from the early 1600s to the late 1670s. The evidence for its origins and flowering ranged across the production of engraved ornament and borders, domestic furniture, architectural flourishes, gravestones, embossed gilt leatherwork and church furnishings (and, of course, picture frames), as well as examining the perhaps better-known body of silverwork by the Van Vianens.

A French paper shone a rare and welcome light upon a style which produced some notable makers of engraved ornament and metalwork in Paris, before evolving into an idiosyncratically delicate form of Mannerism.

The Italian speakers covered the establishment of Florentine Auricular style in architectural designs, carved hardstone and interior frescos from the 16th to the early 17th centuries, and considered the morphing forms of ornament in the Medici frames, and their connections with Italian Mannerist sculpture. These frames in the collection of the Palazzo Pitti were also analyzed from the standpoint of their unique crafting and their conservation.

German Knorpelwerk or Ohrmuschel-style was introduced via pattern books, engraved portrait frames and interior painted and plasterwork cartouches. The Auricular style in Britain was examined through the imported engravings which fed, and the European artists and craftsmen who nurtured, it, during the earlier 17th century, and its continuance during the Restoration; alongside frames in specific collections, and those made for the Fire Judges.  Revival Auricular frames were also considered, as well as the influence of the grotesque and zoömorphic on modern and contemporary art.

Outside the lecture theatre, a display of posters included illustrated pieces on 17th century British plasterwork, a ‘Sunderland’ frame, and Frank Salisbury’s early 20th century Auricular-style frames for his work.

At the end of the conference, an informal discussion of the various papers presented emphasized the need to consider the political background and wars of 17th century Europe, which formed a background to the flourishing of the Auricular style, and also the importance of the court of Rudolph II at Prague as a fermentation cask for its growth and later diffusion. The idea that the Auricular might emerge from such intense scrutiny as clearly definable was replaced by the acknowledgment that it was an even more broadly-based and mutable style than had hitherto been thought; endlessly fascinating and impossible to be neatly categorized.

With thanks to all the delegates who presented such knowledgeable papers on a strikingly varied range of topics, to those who attended and added so much to public and private discussion, to everyone who gave greatly-needed practical help, and to Arnold Wiggins & Sons and ICON for their extremely kind support of this project.

Arnold Wiggins & Sons displayed a hang of 17th century Auricular frames, including some from the series made for portraits of the Fire Judges in the early 1670s (5th October-16th December, 31 Bury Street, London SW1Y 6AU).

‘Between Amsterdam, Paderborn and Rome: a remarkable frame in the collections of the Louvre’ (Dr Charlotte Chastel-Rousseau, Louvre).  Read the paper here

‘Notes on the Revival of the Auricular Style for Picture Frames’ (Christopher Rowell, National Trust).  Read the paper here