by The Frame Blog 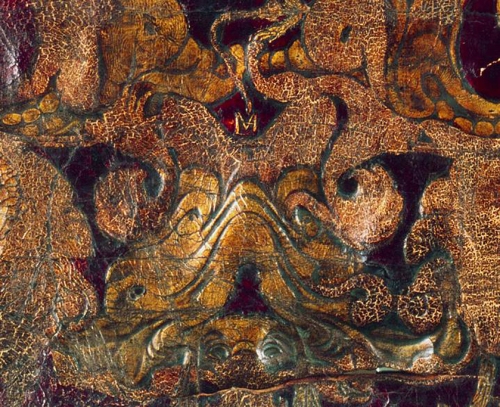 On 4 August 1628 Jacob Dircxz de Swart (before 1594-1641), gilt leather-maker in The Hague, was granted a patent by the States General of the Dutch Republic for fourteen years on a new production method by which it was possible to mass-produce gilt leather with relief patterns. These so-called embossed gilt leathers enjoyed an immediate public vogue. Due to the enormous demand De Swart asked his former companion Hans le Maire (1586-1641), who had moved in 1617 to Amsterdam, to share in his patent. This embossed gilt leather became highly fashionable, both in- and outside the northern Netherlands, not least because specially designed new patterns were introduced which fully exploited the high relief effects. Due to its success, others tried to join in this prosperous venture – one of them successfully: the Amsterdam merchant Maarten van den Heuvel (1585? -1661), who gained protection from the city government of Amsterdam.

The appearance of this embossed Dutch gilt leather was very different from the traditional flat version, the production of which was dominated by leather-makers from Spain and Italy, both of which countries had a long tradition of gilt leatherwork created under strong regulation by the guilds. The patterns of the flat gilt leathers from these countries closely followed traditional textile patterns.

As newcomers to the market, the Dutch gilt leather-makers managed to develop a completely new appearance for their embossed gilt leather. De Swart, Le Maire and Van den Heuvel approached some of the best contemporary artists to produce designs for their newly-developed technique. Amongst these were the painters Andries de Haen and Pieter Potter, the engravers Romeyn de Hooghe, Pieter Serwouters, Christoffel van Sichem sr and jr., and several silversmiths, including some of the best Dutch craftsmen of the period: Hans Coenraadt Brechtel, Michiel Esselbeeck, the brothers Joost and Johannes Lutma, Servaes Kock, François Leermans, Thomas Jacobsz en Elbert Jansz.

Luckily, some of the products from the workshops of Jacob Dircxz de Swart, Hans le Maire and Maarten den Heuvel still survive today. Quite remarkably, the Auricular style is well presented in the patterns of these gilt leathers. One extraordinary example is, for example, the gilt leather wall hanging with its Auricular ornaments from the commissioners’ house on the Leiden-Delft canal; this was delivered in 1649 by the workshop of the late Jacob Dircxz de Swart. Hans le Maire marked some of his gilt leathers with his initials ‘HLM’; one of these, a long panel, has an Auricular style pattern with fruits, flowers, festoons and putti. And from the workshop of Maarten van den Heuvel a gilt leather plaque survives with the portrait of the Swedish king Gustav II Adolf (1594–1632) in a an Auricular style cartouche, dated 1632.

Dr Eloy Koldeweij (1959) studied History of Art at Leiden University, the Netherlands, where he specialized in historic interiors. After his PhD research on gilt leather hangings, he worked in several museums, amongst others the Victoria & Albert Museum. Since 1997, he has been the senior specialist on historic interiors at the Cultural Heritage Agency of The Netherlands. He has published and lectured extensively on gilt leather, and on other topics specific to the historic Dutch interior, including wall-hangings, floors, and stucco & plasterwork. He is currently involved in several projects on interiors, amongst others on interior ensembles, and is also lecturing part-time at the University of Utrecht.